Wise people say you should do what you love; for those in business, that translates to selling what you love. When I shipped this vintage unicorn locket/pendant to a buyer, I packed it up slowly, thinking a bit woefully about how I liked it enough to want to keep it. When I shop for my Etsy shop—for everything from vintage clothing, jewelry, and accessories to T-shirts I then remake into upcycled styles—I choose what I love. In the beginning, I wanted to keep it all. Now, I will sometimes get to the point of photographing an item when I reconsider—just for a moment or two. I paused with the unicorn pendant. A unicorn pendant! Of course, I’m happy to make a sale and excited that someone out there will wear it and treasure it. But I’m going to be on the lookout for another unicorn pendant to call my own. 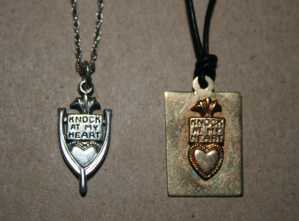 Looking at the contents of my mother’s jewelry box has always been a treat. Oooh, pretty jewelry. She’s got a minimalist style—her constants are her wedding ring and my grandmother’s diamond pendant necklace—so the other pieces only come out for occasions. I have always viewed the jewelry box as a treasure chest and especially love the charms, which she began collecting as a teen and wore on a chunky gold charm bracelet. She wears the bracelet occasionally now without the charms and recently asked me if I wanted any of them. (“You’ll get them eventually,” she said. “If you want them, you might as well take them now!”) It’s hard to pick favorites, but I might have to say it’s the gold charm affixed to a rectangular plate; it’s a heart with a banner that reads, “Knock at my heart.” My father gave this to my mother when they were still dating and the charm originally had a knocker on it that was removed by the jeweler when it was attached to the plate. This peaked my curiosity and a quick search on eBay brought me to a version of the original charm in silver. The knocker moves (it really knocks!). So now I’ve got both versions.

Oh, and one more thing: Both my parents asked about the “when they were still dating” mention. Well, they’re married now so they’re past the dating stage. But it’s definitely worth noting that they’re still married. Happily, too.