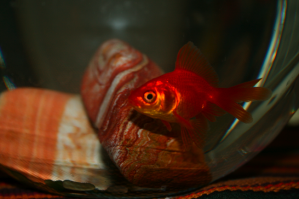 I named the last fish (Henry VIII) and Mr. MVP got to name this one. He chose Mary-Jo-Lisa, from a Ting Ting’s song. I worried that the song would get stuck in my head each time I passed the bowl and spotted her, but it’s one of those songs that is too fun to bother me. It’s a good thing to say about a song so I believe it bodes well for the new fish.